Brecht on Brecht Now-November 20th!
Go to Previous SlideGo to Next Slide

A celebration of Brecht through his poems, stories, songs, and plays, Brecht on Brecht celebrates one of the 20th century's greatest and most prolific playwrights with a stunning, kaleidoscopic, 110-minute revue of Brecht's life's work. Featuring poems, stories & scenes by Brecht, and songs by Kurt Weill & Hans Eisler, Brecht on Brecht explores the political and social issues he faced throughout his life as an artist fleeing the Nazi Regime and as an exile, ultimately landing in America. TBTB originally produced Brecht On Brecht 20 years ago, shortly after the horrific events of 9/11. Here are some of the reviews from the play!

The Reviews from Brecht on Brecht:

THEATERMANIA:
“Does Brecht have something to tell us? Oh boy, does he!”
“The stage overflows with epic poetry and music.”
“It's like having a conversation with a brilliant, restless mind who won't let you get a word in edgewise.”
“Sharp, energetic staging from Viselli. He clearly takes both the form and content of the author's work seriously.”

THEATERSCENE.NET:
Brecht’s excoriation of capitalism and middle-class morality could seem pertinent to many today. Theater Breaking Through Barriers’ passionate presentation of Brecht on Brecht preserves his sensibility while providing a welcome platform for its cast of charismatic disabled performers.

NEW YORK THEATER by Jonathan Mandell
TBTB production of “Brecht on Brecht” goes far beyond most theater in orienting the audience
One leaves the show wondering why every theater doesn’t take these simple steps toward greater accessibility.

LIGHTING AND SOUND AMERICA:
Theatre Breaking Through Barriers is devoted to created opportunities for artists with disabilities, a consideration that vanishes when the company is so confident in its presentation
Brecht on Brecht also offers a powerful reminder that we are always living in a time of upheaval.

BROADWAY WORLD:
Brecht on Brecht was masterfully brought to life by a talented ensemble
I cannot recommend Brecht on Brecht highly enough.
You will leave inspired - I certainly did!

We also made an accessible playbill for this production to help audience members to access it on their own if they need that accommodation. Here is the downloadable file to access the accessible for Brecht on Brecht: 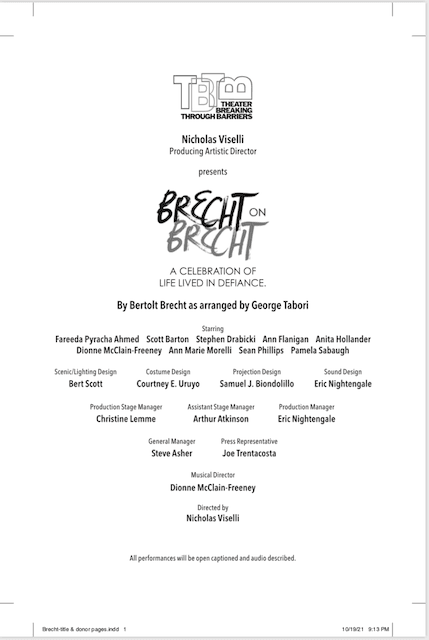 Click or tab on the image to view the Accessible Playbill for Brecht on Brecht!