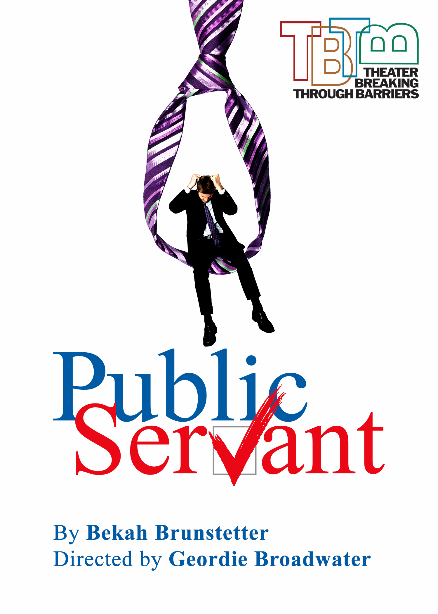 Theater Breaking Through Barriers (TBTB), kicked off their 40th Anniversary season with the World Premiere of PUBLIC SERVANT, a play by Bekah Brunstetter (NBC’s Emmy-winning drama This Is Us and the just announced Oklahoma TV series). Directed by Geordie Broadwater, the production starred Chris Henry Coffey (Broadway’s Bronx Bombers, David Schwimmer’s Trust opposite Clive Owen and Viola Davis), Christine Bruno (Jose Rivera’s adaption of The Maids, Bekah Brunstetter’s Forgotten Corners of Your Dark, Dark Place with TBTB) and newcomer Anna Lentz in her Off-Broadway debut. The play is the second part of a trilogy of plays by Brunstetter that kicked off with The Cake in February at Manhattan Theatre Club. Previews for PUBLIC SERVANT began on May 25 at Theatre Row's Clurman Theatre with an Opening Night on Thursday, June 6.

In PUBLIC SERVANT, Ed has been newly elected as County Commissioner. Ed is one of the good ones. With his daughter Hannah by his side, he is going to change the world -- or at least his little corner of it. Meanwhile, all world-weary Miriam needs is to sell her late Mother's house. Disillusioned with the system but desperate, she turns to Ed for help with what should be a simple request. But in the world of politics, is anything ever simple?

Bekah Brunstetter's plays include The Cake (Ojai Playwrights Conference), Going to a Place where you already are (South Coast Repertory), The Oregon Trail (Portland Center Stage Fall 2016, O’Neill Playwrights Conference), and many others! She has previously written for MTV (Underemployed; I Just Want My Pants Back), ABC Family’s Switched at Birth, and Starz’s American Gods. She is currently a co-producer and writer on NBC’s This Is Us.

Geordie Broadwater is a New York City-based director and writer. Geordie’s previous experience directing Bekah’s work include The Oregon Trail at Fault Line Theater in 2017 and You May Go Now at 45th Street Theater in 2009. Geordie holds a BA in English from Harvard University and an MFA in Directing from the Brown/Trinity Consortium.

World premiere production, (commissioned by and written for TBTB) June 6 - 29, 2019, Clurman Theatre — Theatre Row, NYC
Directed by Geordie Broadwater. Images of scenes from the production (ALL PHOTOS BY CAROL ROSEGG)