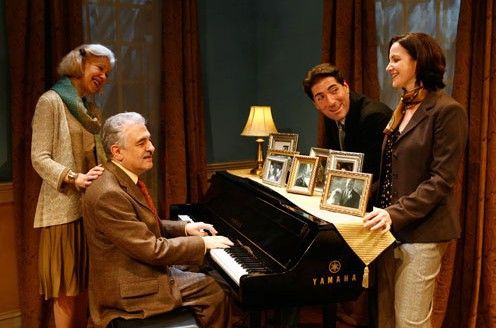 Theater Breaking Through Barriers (TBTB) is the only professional Off-Broadway theater organization dedicated to advancing artists and developing audiences of people with disabilities and altering the misperceptions surrounding disability by proving, once and for all, that disability does not affect the quality or integrity of our art or artists. We began in 1979 and are currently celebrating our 41st season!

For our first 28 years, we were known as Theater By The Blind, but increasingly we felt we must include artists with all disabilities. So in 2008, we officially changed our name to Theater Breaking Through Barriers, retaining our "TBTB" acronym & becoming the home base Off-Broadway theater for people with disabilities.

We have an outstanding mission that is uniquely ours, and we have acquired what we think is a well-deserved reputation for excellence.  The New York Times calls us “an extraordinary troupe designed to defy expectations."  The New York Post says we are “quite simply one of the most enjoyable companies in the country,” and The Village Voice touted us as “long purveyors of quality drama.”

We believe that through artistic excellence and the development of role models, we can make our claim at last for the full inclusion of people with disabilities in our society.

The time for our most significant growth and influence is now. This July marks the 30th anniversary of the passing of Americans With Disabilities Act.  56,000,000 of us, nearly 20%, are dealing with a disability.  But nothing like this is visible in the media.  Only 2% of characters on TV exhibit a disability and only 0.5% are allowed to speak.  Hollywood is required to track casting based on age, gender, and race, but categorically resists tracking disability. We must change this and gain for all artists with disabilities the same acceptance that has been achieved by artists of color.

Disability is the only diversity that cuts across all racial, gender, social, and class distinctions. Disability knows no age, race, religion, gender, culture, or sexual orientation.  As such, we view disability as a common ground, where the voices from every sector of our society can come together to be represented and expressed. To accomplish this, it is imperative that we reach out to all members of our society, so they know our voice and realize that we serve and represent them.