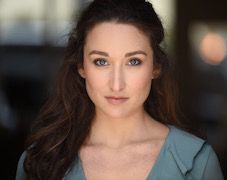 Born into a Slovenian acting family, Gaia Visnar grew up as a theatre kid and has been actively involved in her country’s acting community. In addition to an extensive international acting education, she is a graduate of Circle in the Square Theatre School in New York City, where she currently resides. Her performance as Claire in The Maids with The Seeing Place Theatre earned her a 2019 NYITA nomination for Outstanding Actress in a Leading Role. Other recent theatre credits include the titular role in an international adaptation of Antigone (Outer Gaea Company – UK), Emmy in A Doll’s House, Part 2 (Living Room Theatre), Ismene in The People Vs. Antigone (The Seeing Place Theatre), Lady Anne in Richard III (Theatre Breaking Through Barriers), Maria in Twelfth Night (The Lady Shakes Theatre Company), Paige in The Doorman (HB Playwrights Theatre) and Brutus in Julius Caesar (Circle in the Square PW). She has played the leading role in a number of short films, the role of Saga in the feature film Yuraq and is currently in pre-production of a feature film Sealand. She is a member of NYWIFT (New York Women in Film and TV) and LPTW (League of Professional Theatre Women). Follow her at www.gaiavisnar.com or @gaiavisnar.