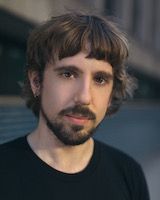 Nick Walther is an NYC-based stage actor, performer, audiobook narrator, and voice actor. Nick is a character actor who cut his teeth in Brooklyn's experimental theater and performance scene -- some acting highlights include performing in a six-hour durational play ("Haunted House") at MoMA PS1 for their Spring Performance Festival 2018, performing in TBTB's Playmakers' Redux at Theatre Row, performing in Exponential Festival shows like "Police in the Wilderness" and "Bernie Sanders Wants to Take Away My Fire Island Timeshare," performing in an immersive theater dinner party, Spinoza Party #11, as part of Creative Time's Summit X, and curating/hosting/performing several shows at the beloved (and recently shuttered) underground venue, The Glove. Nick is also an emerging audiobook narrator and voice actor, with two audiobooks, American Animals and Golden Arm, produced by Recorded Books, being released in 2020. He is a member of Theater Breaking Through Barriers, American Renaissance Theater, and Saints of an Unnamed Country, and a co-founder/host of Seize the Memes of Production, the first live meme-making gameshow (that we know of). Follow him on Instagram @lowcloutnick and check out his voiceover work at www.nickwalther.com.