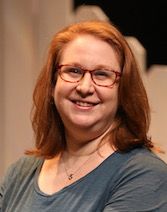 Susan Ferziger began her career in theater with a stage management internship at Playwrights Horizons during the 1996-97 season.  She next served as Development Associate/Annual Fund Manager at Alliance of Resident Theaters/New York (A.R.T./New York).  Susan returned to Playwrights Horizons as the Manager of Foundation and Government Giving in 2003 and was promoted to Manager of Institutional Giving in 2008 and Institutional Giving & Campaign Manager in 2015.  She serves as Secretary of the board of Theater Breaking Through Barriers, a New York City theater company dedicated to presenting theater with an integrated company of disabled and able-bodied actors. Susan has served as a theater panelist for the New York City Department of Cultural Affairs and A.R.T./New York's space grant program, and as a development consultant to Lynx Ensemble Theater.  She graduated from the State University of New York at Geneseo with a B.A. in English and Theater.