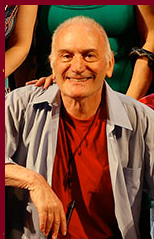 Ike Schambelan founded Theater Breaking Through Barriers, formerly known as Theater By The Blind (TBTB) in 1979 and was proud to have built-in into the only Off-Broadway theater company that advances acceptance of disabled theater artists by showing them doing first classwork. He directed many productions for his company, but the work that gave him his greatest satisfaction was directing Shakespeare. Ike made it his personal mission to try to change the way the world performed Shakespeare by going back to Elizabethan rules of much faster tempos, audience address at any time (not just in soliloquies), and actors doubling of characters. He presented highly successful productions of Hamlet and A Midsummer Night's Dream – both with six actors, The Merchant of Venice with seven actors and Romeo and Juliet, "The two hours traffic of our stage," in two hours with four actors.

Ike once wrote: "I have two deep artistic ambitions – to change the way the world does Shakespeare and to increase the acceptance of people with disabilities. Doing Hamlet, A Midsummer Night's Dream, Romeo and Juliet and The Merchant Of Venice, it's been wonderful to feel the company take my ideas and leap forward with them, to see their own powers grow through working on Shakespeare and to feel my increasing sureness about my approach. The universality of the plays makes the use of actors with disabilities absolutely right."

Among the other productions, Ike directed during the 35+ years in which he created and ran TBTB, some of his favorites included Shaw's Misalliance, Brecht on Brecht, Ted Hughes's adaptation of Seneca's Oedipus, A. R. Gurney's, The Middle Ages and The Cocktail Hour, world premieres of new plays and revues about blindness including Whattaya Blind?!, Blinks and Blind Spots and two NYC PREMIERES of the work of the vital disabled playwright, John Belluso: The Rules of Charity and A Nervous Smile. From 2011 through 2014, Ike created TBTB's short play festival in which he commissioned some of this country's most prominent playwrights to write short plays dealing with disability, including Bekah Brunstetter, Bruce Graham, John Guare, A. R. Gurney, David Henry Hwang, Samuel D. Hunter, and Neil LaBute. Ike also wrote several plays, produced by TBTB – two one-acts, Gus and In The Bin, and one full length, When I'm 64.

Apart from the creation of his legacy, Ike also directed at Manhattan Theatre Club, Playwrights Horizons, The New Dramatists, Equity Library Theatre, The Long Wharf Theatre, The Pittsburgh Public Theater, and the George Street Playhouse. He was the Artistic Director of the Touring/Children's Theatre at Long Wharf, the Woodstock Playhouse, and the Austen Riggs Theatre. For 5 years he produced and directed radio and television commercials for Kenyon and Eckhardt Advertising, working on Ford, Macleans, Brylcreem, and Nabisco. He was a member of the Actors Equity Association and the Stage Directors and Choreographers Society. He received his bachelor's degree from Swarthmore College and his Doctor of Fine Arts from the Yale School of Drama.

Ike Schambelan was, in every sense of the word, a one-of-a-kind individual. His energy, enthusiasm, love for his craft, and innovative brilliance made him truly shine. He was an outstanding colleague, a mad genius, the greatest of mentors, and the truest of friends. He was an artist in every sense of the word; A firebrand for the way the world performs Shakespeare and a pioneer of theater for performers with disabilities.